Here are the remarks from an action we did today at River Point Plaza, a new development that used over $30 million in TIF funds. CPS claims we are broke, and yet school money continues to get handed over to these wealthy developers. And on top of all that, CPS retaliates against activists who speak out.
The leaders of the Chicago Public Schools constantly do outrageous, shameful things. They viciously close schools, they starve the neediest kids of funding, they create chaos wherever they go.

And now, we have a new shameful, unforgivable act. Yesterday, the leaders of the Chicago Public Schools FIRED a beloved, dedicated, outstanding special education teacher, Sarah Chambers. In true CPS fashion, they performed this cowardly act the afternoon before they furloughed us and as we start our Spring Vacation. But that will not stop us from calling out their evil actions.

Sarah Chambers has faithfully taught students with special needs at Saucedo Academy, an elementary school in Little Village, for nearly a decade, in a community our Mayor pretends he wants to give sanctuary to. She is an award-winning teacher who always received top, distinguished ratings. Her students, the staff at the school, and the parents and community speak glowingly of her. She also supports LGTBQ students by running a Gay Straight Alliance club. She protected her students when administrators tried to illegally cut special education services. She encourages her students with special needs to find their own voice to speak out for justice. She is a powerful educator.

As a special education teacher and a member of the Special Ed Taskforce myself, I have come to know Sarah and her tireless work for special education students well. She has spoken out numerous times about the need for more revenue. How our Mayor could fix these manufactured budget gaps hurting kids tomorrow by releasing TIF funds and pushing new city taxes that target the rich and corporations. Instead, Rahm Emanuel and his appointed Board of Education decide to CUT from special education students and students living in the deepest poverty in our city. Disgusting.

Sarah could not be here today because she is currently on a flight to Brazil invited to speak by a UN representative. She is building international solidarity with others fighting austerity and injustice. Sarah is known internationally as an advocate for children.

But this is what Rahm & his appointed board do. They attack what is right and good. They come after the most vulnerable. They claim to care about kids and communities, then cruelly rob them of their greatest advocate in the middle of the school year even as they threaten to cut their school year short due to budget cuts.

Attention CPS Board of Education and Mayor Rahm Emanuel, know that this will not stand. You have woken the sleeping giant, my friends, and come after the wrong person. Sarah Chambers has touched 1000s of lives throughout this city, this country, and this world. I guarantee she is more popular that you, Mayor Emanuel. And you will see what solidarity looks like. Those 1000s will not forget your actions.

We demand you reinstate Sarah Chambers to her special education teaching position immediately. We demand that instead of coming after our best teachers and child advocates, you spend your time seeking out new revenue soltions. Release the TIF funds and FUND. YOUR. SCHOOLS.

For those of you here today. Please sign the petitions being passed around. Also share it online. We ask all here to call their state reps to demand to pass a bill that ties TIF funds directly to special education need instead of giving handouts to wealthy developers and your rich buddies.

An injury to one is an injury to all. And Rahm and CPS, you have injured one of our best. 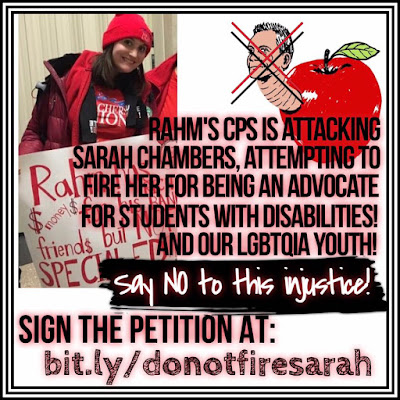