It's Time to Bring Charters Back Into the Public Fold

Across the country, it is becoming ever clearer that the charter experiment has failed. Every glowing media story highlighting a charter "miracle" has been debunked. The so-called "success stories" are easily exposed to be examples of selectivity, school pushout, discrimination against students with significant special needs, behavioral challenges, or English Language Learners, obsessive test-prep focus, and oppressive "no excuses" discipline.

Charter school teachers in my city are organizing unions. Just this week, the teachers of the Urban Prep Charter Network voted for a union. I am so happy for my brothers and sisters who were being exploited, laboring in unacceptable working conditions, standing up for their students' right to a quality education. I applaud their courage in the face of massive pushback from slimy charter leaders. What they did was right for kids.

The charter cheerleaders told us it was unions that were holding back innovation. Turns out, unions were all that were keeping even worse conditions from befalling our schools in the name of austerity-loving, greedy, and racist politicians and leaders. Without unions, charter teachers see how damaging having no protections can be. They work for lower pay, they have even less job security, they have no way to advocate for their students and the resources and time they need to teach well.

We were told charters would cut back on administrative costs. Instead, they duplicated and expanded useless, yet well-paid, administrators in our funding-starved system. Suddenly, instead of just one CEO in Chicago Public Schools, we have dozens, all making exorbitant salaries to oversee a small handful of schools. We also have seen the ballooning of middle-management, as each charter chain has its own HR department, marketing positions, legal teams, etc

We were told charters would bring transparency and honesty to a broken system. Instead, they have exploded corruption and unethical behaviors. We have seen scandal after scandal as charters have been called out on all kinds of greed and misuse of public funds. Here in Chicago, we've seen one our city's most politically-connected charter CEO Juan Rangel step down after a series of federal investigations revealed defrauding investors.

Charters did not even bring the spaces for experimentation as the system has gelled into one that favors pre-established corporate chains over the original inspiration of the "mom and pop", teacher-led school. In true Walmart fashion, cookie-cutter, "no excuses" factories are the norm in today's charter school "marketplace." Charters are not innovative.

At some point, even the politicians and leaders pushing charters and choice need to admit it is a failed experiment. One that has actually weakened the system as a whole.

It is time for public education advocates to talk not only about ending charter expansion, but to make the case to bring charters back fully into the public fold. I suggest we do it slowly-as opposed to closing these schools outright- to quell the disruption that is so damaging to our children. Allow all charter teachers to belong to their city's teacher union. In Chicago, instead of forcing these teachers into a separate local, I want to see all teachers in the Chicago Teachers Union.  And phase out the private management, city-wide attendance boundaries, and separate punitive discipline and retention policies which discriminate and pushout students who struggle in school. Let these schools become neighborhood schools even as we fight for the types of resources that all children deserve.

Let's make charter schools nothing more than a sad chapter in the history of public education. 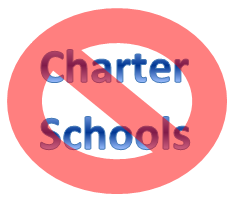