Yesterday, I was disappointed to see Teaching Tolerance-a social justice education resource which I have personally used many times-publish a blog post entitled Teach For (a Diverse) America.  It was difficult to see a TFA alum spout this harmful organization's current PR talking points on a site I trust and love.  So,  I’d like to take a few moments to debunk TFA’s deceptive diversity strategy.

But first and foremost, I want to say that getting more teachers of color into our classrooms and keeping them there is of the utmost importance. 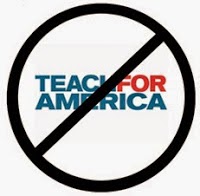 But TFA’s overall mission, actions, and impact absolutely negate any benefit from their inauthentic push for diversity. Over the past five years, this darling of the media has come under increasing attacks and criticism even from within their own ranks.  As a result, TFA has used “diversity” as a way to rebrand.  But their core mission which undermines public education and increases inequality remains unchanged.

Here are a few ways TFA actually hurts teachers and students of color:

1)  TFA has a direct tie to the overall reduction in teachers of color in schools.  The black middle class is shrinking, and TFA’s anti-union stance and its attacks on the teaching profession are inextricably linked.  Current education policies-which TFA aggressively promotes-are forcing far more black educators OUT of the classroom than TFA could ever put back in.  Many black educators cite the worsening working conditions, the loss of job protections which disproportionately affect African American teachers, and the effects of neoliberal edreform policies around school closings, turnarounds, and charter proliferation as reasons why many are leaving/being forced to leave the profession.  TFA spouts the virtues of teachers of color out of one side of their mouth while they spit on veteran black educators out of the other.  This loss of black educators was perhaps most dramatically seen in New Orleans after Hurricane Katrina when TFA helped  illegally displaced thousands of veteran black educators-most from the communities where they teach.

2)  TFA is NOT actually more diverse when compared to the urban districts and urban schools where most of their recruits are placed.  TFA disingenuously uses national statistics when they brag about their diversity saying  “Our public school teachers are 84 percent white, 7 percent black and 6 percent Hispanic. Four percent identify with other ethnicities…. half of new TFA teachers identify as people of color”.  But in places like Chicago, only 47% of teachers identify as white with 28% of teachers being African American and 17.9% Latino.   In fact, in many of the privately-run charter schools which are heavily staffed by TFA and TFA alums, their staff is far LESS diverse than nearby neighborhood public schools.

3)  Another point is that TFA does NOT do a good job of creating “teachers,” regardless of color.  From its recruitment process on, TFA’s focus in unabashedly not about creating career teachers.  They are not a teacher pipeline, they create “leaders”-luring recruits in with promises of direct paths to law school, grad school, firms like Goldman Sachs, or lucrative educational leadership/technology gigs.   Less that 20% of their members end up staying in a classroom more than 4 years.  TFA is simply not revolutionizing the teaching force.

4)  TFA exacerbates inequalities for students of color.  TFA novices begin their meager two years with less than 20 hours of practice in front of children, even for students with special needs. Regardless of the racial/socio-economic background of their novices, TFA is offering our neediest kids uncertified, underprepared, short-term novices in lieu of professional educators.

5) To many TFA corps members of color, the organization has NOT been a safe space.  TFA has been aggressively recruiting more people of color without changing their elitist, white, middle-class normative culture.  In fact, many CMs of color describe feeling used by TFA to the benefit of the white and wealthy.  Here are some rich and fascinating counterstories of TFA corps members of color: A Racio-economic Analysis of Teach for America: Counterstories of TFA Teachers of Color

6)  If getting more teachers of color into the classroom is a priority (which it should be) why is no one doing anything about the rising costs of tuition, the struggle for many teachers to support themselves during a semester to (in some cases) a full year of unpaid student teaching, and the increasingly exclusionary teacher basic skills tests?  For starters, how about instead of giving TFAers those $10,000+ Americorps grants (including the large number of corps members who are NOT people of color or from low-income backgrounds), let’s save those public tax dollars for teachers of color who want to be career teachers.  In countries where education is valued, teacher education is completely free.  And let’s not forget that the TFA/edreform push for “higher standards” in teaching through “more rigorous” entrance exams has resulted in a dramatic drop in the numbers of African Americans and Latinos entering teacher prep programs.  Of those who do get in, the costs of a college degree today--especially one that leads to a career where most will likely never make enough to easily pay back loans—are becoming prohibitively high.

Unfortunately, the author of this blog makes it seem like the shrinking number of teachers of color is the fault of Schools of Education.  Make no mistake, teacher education is under attack just like K-12 education.  Neoliberal education reform is intentionally making it less desirable to become a fully-certified teacher.  And as so many other neoliberal reforms, the greatest negative impact falls on people of color and people from low-income backgrounds.  Pushing more and more people into fast-track alternative certification programs like TFA is intentional and damaging.  A low-skilled, short-term teaching force may be in the best interests of corporations and the elite, but it does not benefit children.

7) TFA practices disaster capitalism which is devastating communities of color.  Teach For America is supported and funded by the very forces which caused the financial crisis throwing many families of color into foreclosure, bankruptcy, even homelessness, which refuse to pay workers fair wages thereby growing poverty, and are increasing inequality today.  When your largest funders are companies like Walmart, Bank of America, and Goldman Sachs, you do not get to pretend to speak for the oppressed and disenfranchised.

Ultimately, TFA’s focus on diversity is an attempt to cloak the very real damage this organization does, especially to students, communities, and teachers of color.

On a personal note, I recently returned to the Chicago Public Schools and now teach in a school on Chicago's southside where over 90% of the teachers are African American women.    These veteran black educators have gone through the chaos of school closings, many grew up in and still live in the community offering a wealth of knowlege, and are some of the most amazing teachers I have ever met.  We also have one TFA teacher.  While a lovely young lady and a person of color, she comes from out of state, is new to Chicago, is not trained for the  special education position she was placed in, and is there because the last TFAer left after his two years were up.  This is not a solution.

I will end on this. There ARE organizations out there doing the work of attracting and supporting more people of color through full teacher preparation programs.  In Illinois, Grow Your Own, is doing amazing work recruiting people from the communities where they hope to someday teach.  And they do so without learning to teach on other people’s children.  GYO helps members pass the Test of Academic Proficiency and helps provide funding to complete a quality teacher prep program offering tutoring as needed.  A GYO graduate completes their teacher preparation before ever stepping foot in a classroom.  And they are there for the long term.  Every tax dollar, Americorps grant, and media story should go to programs like this.

And Teach For America, regardless of their latest diversity PR spin, needs to be gone.  Let's start by taking it off the Teaching Tolerance website.