Despite negative community impact, Noble Street Charter Network seeks to expand on the southwest of Chicago in the midst of a devastating budget crisis.

The Chicago Public Schools is experiencing a manufactured budget crisis of immense proportion leading to truly debilitating cuts to vast numbers of schools around the city. Schools are reporting the loss of teachers and support staff, as well as reductions in after-school programs, elementary sports teams, librarians, and special education services. In addition to over $200 million dollars in cuts announced at the beginning of the summer, another round of layoffs-including nearly 500 educators being pink-slipped-took place just this past Monday. The schools hardest hit by these cuts are schools serving high numbers of students with special needs and schools designed specifically for students with significant disabilities.

And it was on that date, the day thousands of CPS workers were told they would not be returning to their school communities, that the Noble St Charter organization came out to cheerlead for a new Noble campus on the southwest side at a Neighborhood Advisory Council (NAC) meeting.

Noble St has an ambitious expansion plan that has nothing to do with community need. In a leaked Teach For America document obtained by the education blogger EduShyster, you can see Noble St and other charter operators' plans for massive growth:
﻿
Charter operators actually have a financial need to expand at any cost, or risk defaulting on public bonds they have taken out. UNO Charter Network notoriously came under federal investigation for misuse of those government bonds.

And so Noble St has been scouring the city, desperately searching for a site to build, despite the obvious lack of need and potential negative impact to communities. Noble St first tried to open on the northside of the city, but was met with strong community and elected official opposition forcing them to yank that proposal. They also tried to move an existing school to a different location on the northside and again that proposal was yanked after meeting strong neighborhood resistance. Noble then turned its sights on the southwest side, beginning with at least two proposals, then dropping that number down to one after yet more resistance.

Now Noble St is focusing all its attention on a southwest side location at 47th and California. There is absolutely no need for a school just five blocks away from Kelly High School and down the street from a new UNO High School. A number of other new high schools have already been built recently in the area including Solorio and Back of the Yards High Schools. All neighborhood schools in the area will be severely impacted if this Noble expansion is allowed to proceed and students and resources are allowed to be siphoned away. Despite repeated Noble St representative claims, most high schools have space for more students and many are seeing dramatic declines in enrollment. As we saw during the school closings debacle of 2013, CPS utilization numbers are way off as leadership and staff of schools report vastly different realities. Kennedy High School has a whole wing that is currently being rented out to an elementary school and could be re-opened. Kelly High School has lost over a thousand students in the past ten years. And Gage Park High School is dwindling down to a few hundred students, to name a few.

Thanks to CPS' ridiculous and unfeasible student-based budgeting system, even minor drops in enrollment will have major implications for local schools. Schools are already reporting losses in after-school activities, arts, library, and special education services. These schools have shown impressive improvement over the past 10 years despite cuts, yet they are being starved out of existence. And the building of a new school will be the nail in the coffin for some community schools.
﻿﻿﻿﻿

﻿How can Noble St  continue to push its plan to expand? Even the charter-friendly Illinois Speaker of the House Michael Madigan has come out against this charter expansion. Do these people truly not give a damn about the impact to this community? Do they really have the gall to pull proposals from the northside after largely white resistance, but ignore the THOUSAND mostly Latino southwest side parents, students, teachers, principals, staff, elected officials, and community members who came out to support community schools and say "NO TO NOBLE" on July 23rd?

﻿﻿﻿﻿﻿﻿﻿﻿The CTU alongside community and parent groups across this city have launched a campaign to fight for revenue for ALL students in Chicago. We have been pushing the Board of Education to seek money from a financial transaction tax, releasing TIF funds, progressive tax sources, and to pressure the banks to end toxic financial deals. Noble St has never joined us in the streets or at Board meetings. Instead, they turn their people out in order to steal money from schools that can least afford it. From the schools which serve the most students with mild, moderate, and profound special needs or Limited English proficiency (Noble does NOT serve these kids-see graph below.) From the schools that take in the students Noble callously casts aside every year thanks to oppressive discipline and academic requirements. From the schools lacking the social capital, political power, and access to wealthy donors to fill their coffers despite hard times.﻿﻿﻿﻿
﻿
Shame, shame on Noble St for siding with the very people destroying communities across this city and state. Noble St ridiculously has a campus named after Governor Rauner who is currently at the front of the attack on working people and public services. The new President of the Chicago Board of Education-the wealthy Frank Clark-also has a campus named after him. Their donors represent a who's who of the top 1%, the very forces looking to dismantle public education.

If Noble were noble, they'd pull this proposal for a new charter school on the southwest side immediately.

Noble St, this is your chance to show you have an ounce of moral fiber. I cannot believe the students, parents, and teachers at your schools truly want to participate in such a nefarious plan. Show some solidarity and work with your community instead of splitting the community. Pull the proposal!!!

Hope to see everyone out at a second NAC meeting graciously scheduled by NAC members after CPS purposefully picked a meeting venue far too small to accommodate all who wished to attend.

Until then, get the word out about the need to end charter expansion and to invest in our existing community schools!

The August 18th meeting is STILL HAPPENING, but as a "Community Meeting" not a NAC.

CPS has canceled the second NAC meeting they promised. Noble St has unsurprisingly also pulled out claiming they won't attend as it's not an "official" CPS event. Of course, Noble has no intention of allowing community members to actually voice concerns in an open forum. CPS' event last week carefully controlled the crowd by telling the Noble folks a different time, purposely choosing a venue that was far too small, and then stacking the room in Noble's favor. They then only allowed people to write questions on cards, which they carefully vetted and only allowed maybe 10 of the 200+ people present to even speak and only to read their cards. Noble's representatives were given unlimited time to respond to questions in order to frame their PR spin. Noble cannot stand real democratic input. 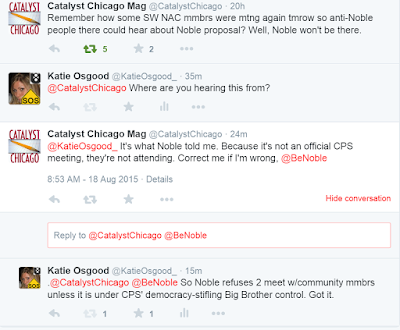 If Noble were Noble, they'd listen to all members of the community, even if it's hard to hear. They'd show up to events that directly affect the community where they want to expand. They'd care more about meeting needs than the PR spin they're selling. They'd look the students, parents, teachers, and community members they are hurting in the eyes instead of hiding behind CPS smoke & mirrors.

But Noble not is not noble. Shame. Shame on this organization.﻿