Devaluing Women's Work: I am a Teacher and My Labor is Not Free

I avoided becoming a fully-certified teacher for a long, long time. I taught English overseas for many years in Japan. I loved the lifestyle. Enough money to live comfortably, but the workload was not excessive. I had time and money to travel, to go out whenever I wanted...it was a pretty cushy job.

And when I came back to The States, everyone told me I should get my education degree and be a teacher. That's clearly what I was supposed to do. But I resisted. Not because I don't like working with kids. Not because I didn't think I'd be good at it. But because of the workload. I knew-I KNEW-that going into teaching meant giving up my life. That in exchange for summers and holidays (sort of), the rest of my life would be consumed by non-stop work, staying up til the early hours of the morn, using all my weekends and evenings to lesson plan, grade, prep....and for not very much money to boot. I knew in my bones that that was what teaching entailed in America.

But I did it. I became a teacher. And the first year I taught in a public school, my life became exactly what I feared. No sleep. Constant stress. Mental health shattered. Social life completely disappeared as I worked my butt off to keep up with the never-ending requirements forced on today's teachers. And this was back in 2009-2010 at the moment Waiting for Superman was telling the world how lazy and terrible teachers are. It was a double slap in the face, the workload coupled with the immense disrespect. And it absolutely crushed me.

But since that time, I've changed. I was pulled into unionism and a growing understanding that my time and my labor were worth something. That I was being EXPLOITED when I stayed up late, spent all my money on my classroom, when I gave up my life "for the kids." That others were profiting off off MY free, guilt-ridden labor. The Chicago Public Schools certainly relied on the fact that even as they cut, sabotaged, and defunded schools further, that I, and my majority women colleagues would pick up the slack. "For the kids." How could we not? So CPS continued to cut, close, crush, complicate.

I don't think that way any more. I now understand that it is not me who harms kids when we are understaffed and under-resourced...it is the bosses. Every time they cut our budgets, close our schools, furlough us, disrupt our communities, it is THEIR EVIL AGENDA that causes the pain. In fact, by picking up their slack, we enable them, we EMBOLDEN them to keep on attacking and keep on cutting, to keep on harming kids and communities. 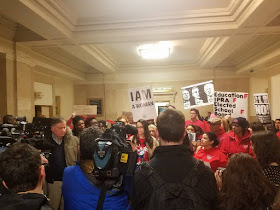 Yesterday, outside Mayor Emanuel's office, I joined with my union sisters and brothers to spend our forced furlough day listening and learning from one anther. I heard my union sisters and our sister from the ATU (Amalgamated Transit Union) speak about how the attacks on women-dominated professions were no accident. Mayor Emanuel, Governor Rauner, Forrest Claypool...they target female professions for cuts and "speed ups" (doing more with less) precisely because they assumed we'd just accept it. "For the kids!" They don't pull this crap with the police or the firemen. With male-dominated professions. Those guys get overtime for every hour they work. No, those cowards in charge in City Hall and the State House come after teachers, our clerks, our social workers and nurses, they come after female bus drivers and train conductors (ATU is 85% female), they come after home-healthcare workers, and DCFS workers, and clinics staffed by women.

As we spent our furlough day in action and solidarity, I came to a renewed conclusion. That standing up against the exploitation of my labor is one of the best ways to help my students. Teachers who are overwhelmed and overworked will never be the best for their kids. We can't run schools on spit and elbow grease. Our kids deserve healthy, functioning, fully-funded systems that do not rely on pain, guilt, or exploitation. And every time we give in, when we bend to the lie that we have no choice but to "do more with less," we allow the bosses to continue to cannibalize our schools for their financial gain.

My labor is worth something. I will join my sisters (and brothers) in the CTU to stop giving away my labor for free. To become militant enough to demand through united action to be paid for my important skills and valuable time. I will not spend my precious time on their ridiculous bureaucratic hurdles. I won't spend all day filling out new paperwork requirements for IEPs or paraprofessional justifications. I will not become a clerk, do the work of social worker, act like a librarian, or do the work of a nurse. I join my union in saying we DEMAND these services be brought back into our schools by qualified professionals. I will not put in grades or upload lesson plans on my own time. You cut our time and our pay, then that means these requirements will take longer to do. We will not do more with less for Rahm & his wealthy backers' profit.

The bosses won't change on their own. Claypool, Rahm, Rauner, Trump, the whole of the ruling class...they care nothing for the "product" we produce: educated young people. In fact, they'd rather the populations we serve-majority low-income, minority, immigrant-they'd rather those children didn't get the education they deserve. Our kids are disposable to them. Worth more to the 1% as a prison inmate than the productive member of society our students have a right to become.

So we must force those in charge to fund our schools adequately. Disrupt their lives to the point that they have no choice but to raise revenue dedicated to our schools and students. To force the rich, the corporations, the financial industry, the banks...force them to pay their fair share.

We are teachers. We are women. And we will not accept their exploitation. We will fight. For the kids.
KatieO at 8:38 AM
Share